Champix is a prescription-only medicine containing varenicline which is used by adults to help them to stop smoking. It doesn’t contain any nicotine, instead it blocks the action of nicotine in your brain to reduce the enjoyment that you get from smoking, which means that a cigarette won’t satisfy you in the same way and also helps to reduce your cravings and withdrawal symptoms.

Champix is a 12-week course of treatment. You start taking one tablet daily, then increase to twice as day as you move through the course. It can be associated with some side effects that can cause altered mood and depression, so you must discuss any previous symptoms you may have had with our doctors and look out for any changes in your moods through your quit attempt.

When you begin a quit attempt with Champix, it will still take willpower. Removing all your smoking cues, such as ashtrays, lighters, half used packets, is essential. Changing your routine around, so that you don’t slip back into old habits, is also good tip. So, after your evening meal if you usually smoke, try taking the dog for a walk instead or move into a different room. If you love nothing more than a cigarette with a coffee, order a tea or soft drink.

This medication is no longer available

How does Champix work?

Champix is a prescription-only medicine containing varenicline which is used by adults to help stop smoking. It doesn’t contain any nicotine, instead, it blocks the action of nicotine in your brain to reduce the enjoyment that you get from smoking, which means that a cigarette won’t satisfy you in the same way and also helps to reduce your cravings and withdrawal symptoms.

You will be given the opportunity to buy Champix during the consultation process for your convenience. In the event that the doctor does not approve Champix treatment, you will not be charged for the medication that you have pre-selected.

How much does Champix cost? 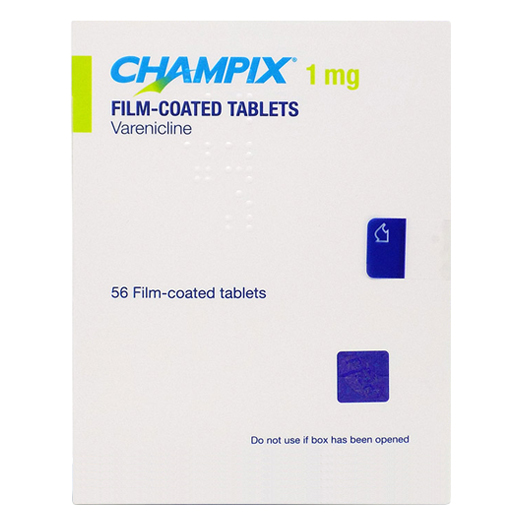 How long does it take Champix to work?

It is recommended that you complete a 12-week course of Champix treatment. Your first prescription will be for a 2-week starter pack. During the first week of treatment, you take a lower dose of Champix. After this, you will move onto maintenance packs for the remaining weeks.

Partway through your 12 weeks you may feel that you are doing well, and haven’t smoked or wanted to smoke, but it is still advisable that you continue until the end of the full 12 weeks. The longer you stay on treatment, the greater the chance of successfully quitting. Completing the 12-week treatment course can increase your chance of quitting by more than 10 times, compared to people who complete up to 2 weeks of treatment3.

How do I take Champix?

Champix tablets should be swallowed whole with water and can be taken with or without food.Before starting your course of Champix, you should decide on your quit date. The date should ideally be between day 8 and day 14 of treatment. If you are not willing or able to set a target quit date within 2 weeks of starting treatment, you should choose a target quit date within 5 weeks. It’s a good idea to write this date on your pack as a reminder.

If you are not able or willing to quit smoking straight away, you should reduce smoking during the first 12 weeks of treatment and quit by the end of that treatment period. You should then continue to take Champix 1 mg film-coated tablets twice daily for a further 12 weeks resulting in a total of 24 weeks of treatment.

We may adjust your dose if you have other conditions or if you find you are experience other side effects. Always take this medicine exactly as our doctor has told you.

What happens if I take more tablets that I was supposed to, or I miss a dose?

You should try to take your Champix regularly at the same time each day. If you forget to take a dose, take it as soon as you remember. If, it is within 3-4 hours before your next dose, do not take the tablet that you have missed. You should never take a double dose to make up for a forgotten tablet.

Is it safe to buy Champix online?

While many online retailers claim to supply genuine medicines, they may be unregulated, provided without a genuine doctor consultation and potentially very dangerous. You can rest assured, PrivateDoc is a fully registered digital health service. We have UK registered doctors that review and assess every consultation. All the medicines we supply are 100% genuine and fully regulated by the Medicines and Healthcare products Regulatory Agency (MHRA).

Champix should not be used if you are:

There are some special considerations that you and our doctors need to consider before starting you on treatment:

When you stop smoking, whether you are using Champix or not, it can affect how your body processes other medicines that you may take.

New or worse heart or blood vessel (cardiovascular) problems have been reported primarily in people who already have cardiovascular problems. Tell our doctor if you have any changes in symptoms during treatment with Champix. Get emergency medical help right away if you have symptoms of a heart attack or stroke or feel concerned about your symptoms.

Tell us if you have experienced seizures or have epilepsy before your start Champix treatment.

Stop taking Champix and tell your GP immediately if you experience any of the following signs and symptoms that may indicate a serious allergic reaction: swelling of the face, lips, tongue, gums, throat or body and/or difficulty breathing, wheezing.

Potentially life-threatening skin rashes (Stevens-Johnson syndrome and Erythema Multiforme) have been reported with the use of Champix. If you develop a rash or if your skin starts to peel or blister you should stop taking Champix and seek emergency medical help.

Tell us if you are taking, have recently taken or might take any other medicines as an adjustment of the dose of other medicines may be necessary. If you have severe kidney disease you should avoid taking cimetidine (a medicine used for gastric problems) at the same time as this may cause increased blood levels of Champix.

Consult our doctor before using Champix in combination with another smoking cessation therapies.

There have been some reports of increased intoxicating effects of alcohol in patients taking Champix. However, it is not known if Champix actually increases alcohol intoxication.

You should not drive, operate complex machinery or engage in any other potentially hazardous activities if Champix affects your ability to perform these activities

What are the side effects associated with Champix?

Like all medicines, this medicine can cause side effects, although not everybody gets them. Giving up smoking, with or without treatment, can cause various ‘withdrawal’ symptoms. These could include changes of mood (like feeling depressed, irritable, frustrated or anxious), sleeplessness, difficulty concentrating, decreased heart rate and increased appetite or weight gain.

Most of these withdrawal side effects are mild or moderate, and will reduce in time however, you should be aware of the possible emergence of serious neuro psychiatric symptoms, such as agitation, depressed mood, or changes in behaviour during a quit attempt with or without Champix and you should contact a doctor or pharmacist if you experience such symptoms.

Other side effects include:
Very common (affects more than 1 in 10 people)

Not known
Very common (affects more than 1 in 10 people)